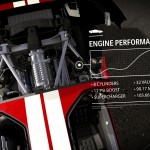 The team at Turn 10 have officially confirmed that Forza Motorsport 4 is in development and will be released in fall 2010 for the Xbox 360. The confirmation details also include the news that it will feature support for Kinect, in addition to the classic Forza controls. The news was accompanied by an announcement trailer, which you can see here, plus four images, which at this … END_OF_DOCUMENT_TOKEN_TO_BE_REPLACED

Mobile racing fans will have a new location, karts and more to try out as the … END_OF_DOCUMENT_TOKEN_TO_BE_REPLACED