If you ever find yourself roaming the summer roads of the Upper Midwest on a Thursday night, be sure to stop at, “Dulono’s Pizza” on West Lake Street in South Minneapolis, Minnesota, USA. It has become a weekly motorcycle congregation of no particular brand, making it the most eclectic collection of bikers and bikes you are likely to see.

Over 2,000 bikes migrate to this four city block square area every Thursday night, not for the pizza, but for the camaraderie, and destination. Of the, “Twin Cities” (as they are known), Minneapolis is the more upscale urbane of the two rather easy going cities. St Paul, (the other Twin) has its riches, but nothing comparable to Thursday night at, “Dulono’s Pizza.”

Although currently bike-less myself, my good friend (gamer tag, “Cuda500” otherwise known as Warren) just happens to have two seriously fast motorcycles available. Since he can’t ride both down to “Dulono’s” he invited me to take his second favorite bike on the 30 minute ride to experience what he calls an amazing gathering of two wheeled characters. His bike of choice is a 2009 V-Max, piped, chipped, and extended to the tune of about 200hp. His backup bike and my ride for the evening, a silver 2008 Kawasaki ZX-14 similarly endowed.

Having owned a stock ZX-14, I knew what to expect, and was pleasantly surprised to find this extended swing arm, geared down version, very easy to adjust to. Such bikes are actually very docile with a respectful wrist, but you need to be ever vigilant as it begs you to flick the throttle to the stops the whole time you ride her. Warren’s V-Max is little different, except for the sound. It’s the only bike that sounds like a muscle car (if you don’t include the “Boss Hoss”), and causes involuntary gawking as it rumbles by.

The event itself was true to the billing, an untold number of bikes and styles converging on a few city blocks. As crammed as it was, the turnout was light due to sprinkles in the forecast. These are hardcore dedicated bikers nonetheless, and weren’t going to let a few rain drops ruin the meet.

Every type of bike was represented; sport bikes, race bikes, stunt bikes, enduros, cruisers, customs, classics, two-strokes, turbos, and sidecars were all there. On occasion even a licensed MotoGP 500 and 250 with lights has been known to show up.

words, I give you bike night at “Dulono’s Pizza!” 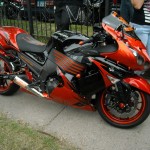 Kawasaki ZX-14 with nitroos – because it’s so slow stock, lol

Paris to Dakar anyone?

Some people have no imagination! 😉

Cuda 500’s chariot of the Gods 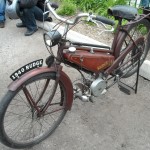 How much is too much with swingarms? When it takes two drive chains to reach the rear sprocket!

Ah ‘Pops’ Yohsimura would be proud

In addition to details of the ESL R1 esports series, we've also seen Spa and … END_OF_DOCUMENT_TOKEN_TO_BE_REPLACED

The format, team and prizes have been confirmed with the ESL R1 Rennsport sim … END_OF_DOCUMENT_TOKEN_TO_BE_REPLACED

There's a brand new Motorspass with 50 tiers of rewards, a country-wide illegal … END_OF_DOCUMENT_TOKEN_TO_BE_REPLACED