Chequered Flag is an early driving game and one of the first driving simulators. It was made by Steve Kelly for Psion Software Limited and released by Sinclair Research Limited in 1983.

You’re given a choice of 3 cars and 10 tracks to set the fastest lap times, with no other competitors on the circuits. Instead, you have to avoid hazards such as oil or broken glass whilst also making sure you don’t run out of fuel or overheat the engine. In addition to promoting the (at the time) realism of the handling, it’s also one of the first to ever feature pit stops. Whilst you might not recognise the circuits given the graphical limitations, each car has a different dash layout for the cockpit view. 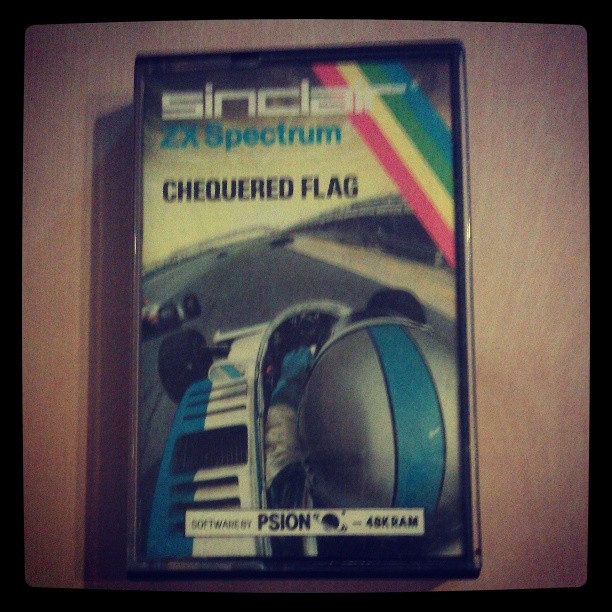 Boxed copies of Chequered Flag for the ZX Spectrum are normally available on eBay for between £1-£3. Not to be confused with the Checkered Flag game released for the Atari Jaguar and Lynx.

Feretti Turbo: ‘Immensely powerful, this turbo charged car develops 640 bhp between 8,000 and 10,000 revs, giving it super acceleration. A very difficult car to handle and only recommended to the more experienced racing drivers.

Psion Pegasus: ‘A new car featuring the latest technology and the highest standards of engineering. Develops 560 bhp between 5,000 and 10,000 revs and has an exceptionally low drag coefficient. A very fast car which is also reasonably easy to drive.

McFaster Special: This car has an automatic gearbox, making it the ideal choice for the more inexperienced driver. Nevertheless it is still very fast and reliable, developing 500 bhp.

Chequered Flag: How to Play

Load and run the game by typing LOAD “flag”

Many racing games tend to follow a similar formula, so it's interesting to see … END_OF_DOCUMENT_TOKEN_TO_BE_REPLACED

After a delayed launch for the PC, Xbox and PlayStation platforms, the … END_OF_DOCUMENT_TOKEN_TO_BE_REPLACED