This week saw two outings, with the Rllmuk Classic Touring Series featuring A Class track machines on the full Mugello course, and the second round of the Virtal Motorsports Classic Series reaching the Old Mulsanne version of Le Mans. And it was an amazing contrast to my last report, in which I managed to wreck my chances in 3 out of 3 races.

I was actually pretty confident for this round – not only do I enjoy fast and flowing tracks like Mugello, but I’d actually logged a reasonable number of hours in the OnlineRaceDriver.com Mercedes 190E I’d be driving alongside official ORD team-mate and tuning wonder Pjeedai. That meant I had a car that was not only set-up for handling and consistency, but I actually knew how it would react under braking or if I had to go offline, and the only worry was the tendency for the final chicane to catch me out.

Qualifying went brilliantly well, putting me on pole ahead of the pre-race favourite, and fellow ORD Club driver Bladerunner, who had turned down our offer of a 190E tune to run a Mitsubishi Starion in a decision he’d later regret. There had been a worry the series would become a 190E spec racing series, particularly as it’s one of the only cars to have aerodynamic adjustment available with stock bodywork, but the grid saw my 190E ahead of the Sierra RS500 of Meatball, the Starion of Bladerunner and two BMWs. 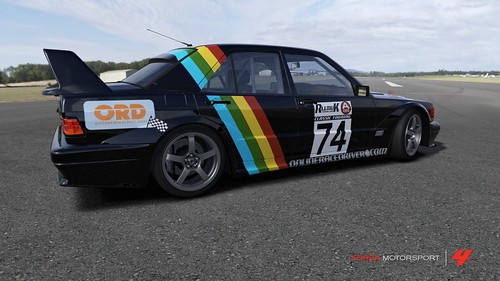 The first start went OK by my standards as I tucked into a cautious third before the red flag was bought out for a first corner pile-up. At the second attempt I came away much better, edged into the lead, and for 9 laps managed to hold everything together to take my first race win in a Rllmuk series, and my first win in 2012!!!

In addition to taking the fastest lap, ORD also claimed second place for Bladerunner and 7th for Pjeedai who’d suffered in qualifying and then got caught up in various race incidents as he tried to make his way back up the field.

Race 2 could have been an anticlimax, but turned out to be the challenge of the season so far. In second place after the first corner, Meatball was pushing hard for revenge when I heard the screech of tyres and looked behind to see this:

That left me with the challenge of chasing down Bladerunner, who was driving his Starion like a man possessed. Although I closed right up to his rear bumper, it was impossible to get even alongside without risking contact, so for 6 long laps I tried every single alternative line around the Mugello circuit. It was only an eventual slip with the kife-edge handling which finally let me past to claim the second win, with Bladerunner recovering to take the runners-up spot from BalhamBadger and a much happier Pjeedai in 4th.

Rllmuk Classic Touring Cars (A Class) Round One Mugello Long:

So onto this evening and the racing has just finished for the second round of the Virtual Motorsports Classic Series, which took place on the Old Mulsanne circuit. The competition in this series is a little tougher than the Rllmuk championship due to the breadth and depth of the field, and the long straight doesn’t favour the ORD ’66 Chevy Nova, which has the aerodynamic properties of a bungalow.

Qualifying didn’t go well, as I set a reasonable banker lap, but then dirtied the following 3, and with a lap of over four minutes, that was the 20 minute session over with a fairly average 4 minutes 19 laptime. I’d managed a mid 17 in practice, but then again the drivers competing for the overall win were somewhere between 4:05 and 4:10, so this was always going to be about having fun and limiting the damage.

That time put me 7th on the grid in the 4th of 6 lobbies, so around the midtable I hope to consistently hit, but with ground to make up. Knowing I could run faster made me hopeful, and I got a great drive out of the final chicance for the rolling start to make up a place and then took the a rival Chevy Nova into the first chicane, putting me close behind the leaders.

At which point I made a mistake in getting too close to the car in front, misjudging his braking and running wide onto the massive yellow rumble strips on the edge of the most important corner – leading onto the massive main straight. I somehow didn’t flip the car, but ended up in last place, with a massive gap to seventh.

After a deep breath and dismissing the idea of retiring right then, I managed to put together a couple of pretty quick laps (Quicker than my qualifying time), and somehow reeled in the second half of the field, making the pass to move out of last and closing slightly on the guys in front as everyone hit the pits as soon as they opened on lap 3 – I gambled on staying out and despite a worrying slide which lost me over a second, managed to make up enough time that while everyone refueled I was actually in the lead.

Try as I might, I was always losing time to eventual winner Pusherman in his Ford Fairlane, so I pitted on lap 7, coming out behind the battle for the podium, which I managed to join for a short while, taking 3rd for a brief period until I completely screwed up the 2nd gear corner at the end of the straight. Fighting back a second time, I managed to move back up into 4th, but as the 9 laps came to their conclusion I couldn’t make up the deficit to rejoin the battle for 2nd and third, although I did somehow manage to record the faster overall laptime with a 4:16.553. Not bad after starting the week lapping in the 4:20s.

Next up is Monday night and a return to the Rllmuk Classic Roadsport series for C Class cars which saw my season start in disastrous fashion. The two 9 lap races are at Nurburgring GP Short, which suits the ORD VW Golf, and I’m hoping to avoid making a hash of the start – that first corner is going to be all important to avoid the carnage, and with the Golf’s handling and cornering bias, I really don’t want to get held up anywhere – it’s all about building a lead for the two fairly long straights.

Here’s a video of the start of the Classic Series race – I’m just editing a more comprehensive highlights version!

In addition to details of the ESL R1 esports series, we've also seen Spa and … END_OF_DOCUMENT_TOKEN_TO_BE_REPLACED

The format, team and prizes have been confirmed with the ESL R1 Rennsport sim … END_OF_DOCUMENT_TOKEN_TO_BE_REPLACED

There's a brand new Motorspass with 50 tiers of rewards, a country-wide illegal … END_OF_DOCUMENT_TOKEN_TO_BE_REPLACED