Jeremy McGrath’s Offroad is already available on Xbox Live Arcade, but is now also available on the Playstation Network in Europe for £8.89, or 9.99 Euros.

It’s an off-road racing game with five vehicle classes including rally cars, Pro Buggies and Pro Lite trucks, but the big beasts are the 800-horsepower, 4WD offroad trucks as raced by Jeremy McGrath himself in the Lucas Oil Off Road Racing Series. McGrath originally rose to fame on two wheels, as a 7-time Supercross Champion who still holds the record for overall race career wins. 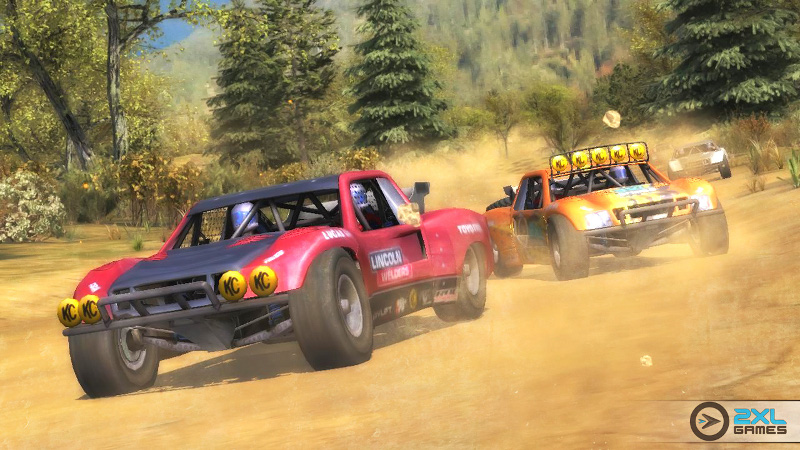 You can race on six tracks, including a snowy Dutch location and a reservoir in the Amazon rainforest, with 8-player online multiplayer, online leaderboards and stats, and a career mode which allows you to race as McGrath in his bit for the Pro2 championship.

The game was developed by 2XL Games, who previously created Baja: Edge of Control and 2XL ATV Offroad 2009. They worked with former AMA East Coast Supercross champion Stephane Roncada to help with track design and tuning the AI-controlled competitors to offer a range of difficulty levels for all players. Jeremy McGrath’s Offroad is being published by D3Publisher on XBLA (800 MS Points), and Reverb Publishing on PSN.

A percentage of all sales is being donated to BeTheMatch.org, a charity that helps people with life-threatening blood cancers, which includes McGrath’s wife Kim who was matched with a marrow donor for treatment for her leukemia.