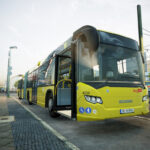 Fancy driving something completely different to your usual sim racing choices? Well, you can now transport passengers around a 1:1 scale recreation of Berlin as The Bus is released in Steam Early Access. The game has been developed by TML Studios and published by AeroSoft with a plan of 8-16 months as an early access title. And apparently the full release will contain … END_OF_DOCUMENT_TOKEN_TO_BE_REPLACED

OK, so this might not appearl to everyone, but it's kinda cool. German developers Aerosoft have released OMSI - Der Omnibussimulator. And if you don't have basic German, that's a bus-driving simulator for the PC. It's set in West Berlin in the late 1980s, and allows you to drive your bus on a seven mile route across the Spandau district (route 92 for any German bus fans). … END_OF_DOCUMENT_TOKEN_TO_BE_REPLACED

Mobile racing fans will have a new location, karts and more to try out as the … END_OF_DOCUMENT_TOKEN_TO_BE_REPLACED