So – is it a Mario-Kart beater? Well, nearly. There you go, you can stop reading now. Oh, you’re still here? Enraged and want me to justify that irritatingly ambiguous conclusion? Oh, alright then – enjoy this ModNation Racers review, just for you. 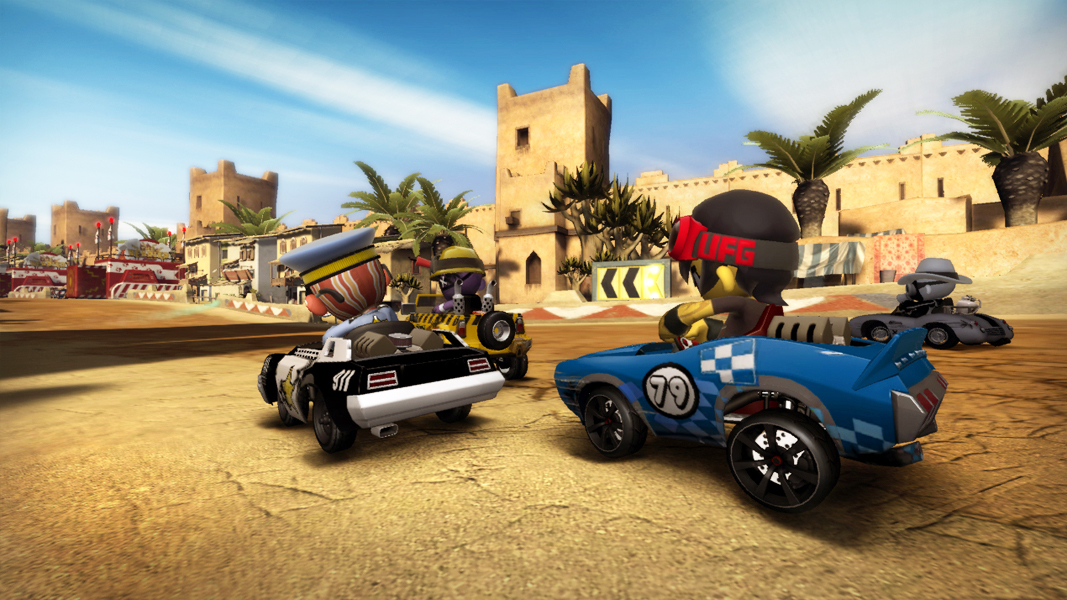 The main problem for ModNation Racers, and indeed for any game of this type is that Mario Kart is brilliant. It always has been brilliant. It’s status as ‘king of the karters’ has been unblemished since it first appeared on the SNES. Over the years it has seen off competition from Crash Bandicoot, Sonic the Hedgehog (and the comically unconvincing M&M’s Kart Racing) remaining brilliantly balanced and playable through its incarnations on the N64 and now the Wii. It’s like Michael Schumacher – been around for years and still irritatingly excellent. But don’t let that put you off ModNation Racers – sometimes things are just good in their own right, and here’s why:

MNR (as it shall be abbreviated from here on), cleverly, doesn’t try to be Mario Kart and offers quite a plethora of options, opening up the game to the user and making it fully customisable. Think Little Big Planet on wheels. Don’t want weapons while you race? No problem. Want to create your own character? Done. Want to paint your own vehicles, tune and upgrade them? Sorted. In fact you could argue that the creation and editing tools are equally (if not more) entertaining as the game itself, and this comes into its own with the track editor. Deliciously simple to use, the track editor enables you to create stunning tracks in less than an hour (you could make yourself an oval in less than thirty seconds), complete with hills, crossovers, jumps, changes in the track surface and even animals by the side of the road. The editor could be a game in itself and once you have finished your masterpiece you can upload it and share it with the rest of the world. If enough people download it, who knows, you might become the new Hermann Tilke and get a call from Bernie Ecclestone one day. In short, it’s a brilliant piece of software.
Buy ModNation Racers (PS3) via Amazon

The handling of the karts is solid enough, and the race mode is supported by a healthy 12-player online mode and thanks to the editor, a potentially infinite number of tracks to race on. Yet whilst the racing is good fun I found myself having much more fun creating circuits, perfecting my hairpin bend at the top of a mountain… but then I like that sort of thing. The racing is not quite as instantly accessible as Mario Kart but that should come with time and practice. The new weapons seem unfamiliar at first and you also have access to a shield as you race which is a nice feature – the square and circle buttons act as ‘attack’ and ‘defend’ rather like in Wipeout HD. The graphics and sound are solid too, other than the irritating voiceovers, but thankfully you can turn them off – you really can customise everything in this game to your personal tastes and therein lies the brilliance of MNR.

The best games are the ones that are perfectly balanced, which is why Mario Kart’s appeal has endured for so long, but MNR is a new breed of kart racer that warrants serious consideration, especially if you don’t own a Nintendo console. It is left to you to make MNR the game that you want it to be – which in itself is a double-edged sword, as its success will defined by how much effort each user puts into the game.

It is said that in modern life, the more choice that is available to us the less satisfied we are with what we already have. Philosopher Alain de Botton argues the secret to achieving happiness is to lower our expectations, and if you don’t expect ModNation Racers to be exactly like Mario Kart you’ll be in for a very pleasant surprise.

In addition to details of the ESL R1 esports series, we've also seen Spa and … END_OF_DOCUMENT_TOKEN_TO_BE_REPLACED

The format, team and prizes have been confirmed with the ESL R1 Rennsport sim … END_OF_DOCUMENT_TOKEN_TO_BE_REPLACED

There's a brand new Motorspass with 50 tiers of rewards, a country-wide illegal … END_OF_DOCUMENT_TOKEN_TO_BE_REPLACED