MX vs ATV Alive has been giving a new burst of life after being offered as a free game to Xbox Live Gold Subscribers, but is it worth paying for?

MX vs ATV Alive tried to embrace the growing mid-price and free-to-play markets by retailing at a lower initial price and with less content – but the plan was to keep bolstering this with DLC, which due to the changes at THQ never really happened as planned.

So what do you get in a game designed to promote DLC? The single player mode starts you off with a very limited selection of tracks to race – you can compete in National or Short Track competitions or explore in Free Roam. With only a handful of locations and the smallest capacity bikes and ATVs available, you’ll soon want to level up.

And there are plenty of incentives to do just that. The tracks, riding gear, upgrades and new bikes are all displayed as the carrots for persevering. There are no real bikes in the game – each category (125,250 and 450 MX, or 250 and 450 ATV) just has two manufacturers, Blaze and Takahashi, with slightly different stats which don’t seem to make much difference on track. You do however get real world racers, and MX champion James Stewart plays a prominent part in the sparse cut scenes which greet you when you hit certain levels. Eventually you get to go up against Stewart, and add his race outfit to the options available for your rider.

There’s no story beyond the racing, which isn’t really a big issue – too often tacking a story mode onto a racing game just makes for a painfully cliched experience. Instead you just focus on winning races or completing the small selection of challenges in Free Roam (Long Jump, Hangtime, Stunt Combo, Jam (60 second combo session). There are also secret vehicles to be found in each Free Roam location – they aren’t particularly difficult to find.

Any longevity was designed to come from the multiplayer, which gives you the choice of competing in Rookie, Amateur or Pro level events as you level up. Each level is limited to specific MX or ATV classes, or you can enter the free-for-all Versus mode. Private matches are also available, but it appears access is limited to the level of each player joining, meaning you’ll all need to have unlocked each level of access before you can race together on anything but the Rookie tracks. 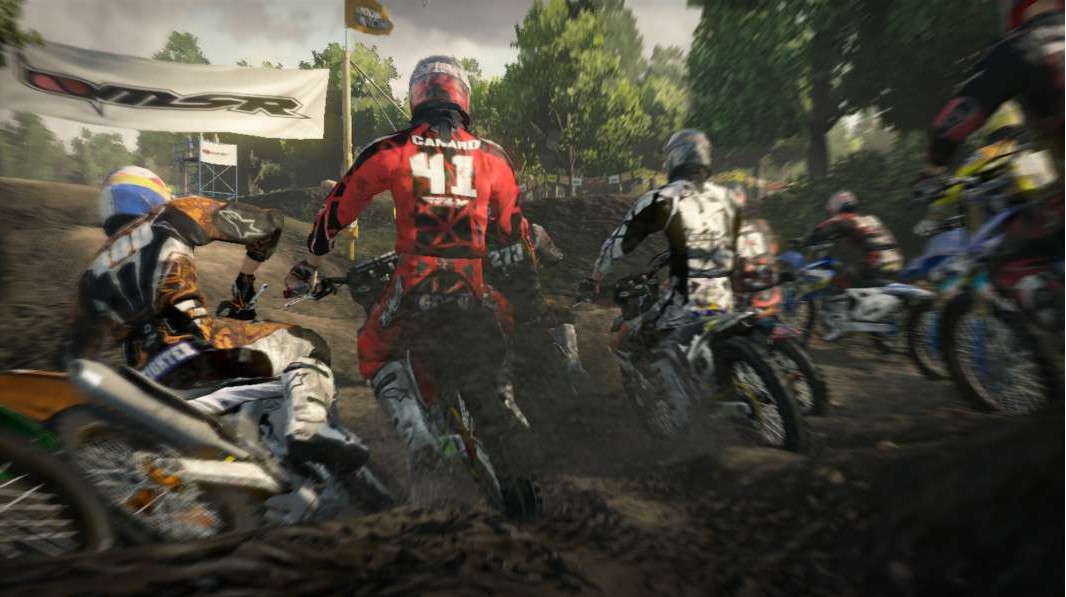 With such a sparse amount of content initially available, it does get repetitive fairly quickly. You’ll find yourself racing the same 2 or 3 tracks over and over initially – which at least lets you get to know the controls. Fortunately the XP rewards are reasonably generous, and you’ll soon unlock the next level of tracks and bikes, which arrive just in time to prevent insanity.

Ironically for a game which was meant to promote DLC and online play, leveling up is best done in single player, which is more generous with the XP given out. Free Roam is also handy in terms of the XP provided for completing both the specific challenges for the game mode, and the general challenges of performing various stunts, crashing a certain amount of times, completing a certain mileage etc.

In racing terms, it’s relatively easy to get to grips with the game, and it is a further refinement of the controls from MX vs ATV Reflex, so fans of the series should be right at home. For newcomers, you might need to get used to braking a lot less, and instead leaning and using the clutch to power around corners. The Seat Bounce lets you get more air from any jumps, which is useful for gliding over obstacles and getting enough time to perform a range for freestyle motocross tricks.

And here’s where I have my biggest problem.

I’ve always been in awe of good off-road riders. They’re able to smooth out and glide over obstacles, but my own attempts in real life involve hitting the bottom of every dip and barely cresting every hill. As a result, I’ve always loved being able to at least achieve something similar in games – from Rainbow Studios own Motocross Madness and Funcoms THQ published Championship Motocross. And you can get to a similar stage fairly quickly in MX vs ATV Alive.

I’m also reasonably co-ordinated, having played games for 30+ years, and having been able to perform a Dragon Punch rather than a Fireball with 99.9% certainty since the Super Nintendo.

So why is it that the MX vs ATV Stunt system leaves me so frustrated? I’m sure devoted fans of the series might be able to master it, but the experience of everyone I’ve talked to has been one of seemingly random success or failure – which wouldn’t be so bad if specific stunts (the backflip and 360) weren’t required for challenges and achievements.

Basically when approaching a jump, you need to be on the throttle, hold down RB for the stunt modifier, use the Right Stick to Seat Bounce for extra air, and when taking off, using the Right Stick to select your trick, and the left stick, clutch and brake to try to land on two wheels again in time. Without accidentally holding Right and Left stick, LB and RB at the same time to trigger your rider to Bail Out (Which is a move with absolutely no purpose in the game).

Now try doing that when you’re hammering out of a turn and needing to hit a jump fast to try and perform a combo of two tricks. In case you’re wondering, here’s the list of tricks in MX vs ATV: Alive.

It’s admirable that Rainbow Studios have attempted to include a wealth of controls to bring as much of the real MX experience into the game as possible, and the challenges of simulating motorcycles have long been recognised as a greater challenge than cars. If they’d just left out any requirements for aerial stunts, and allowed it to be the preserve of those wanting to show off, there wouldn’t be a problem.

And it’s niggles like that which let the game down – it feels as if in addition to being lighter on content, there might have been pressure for a shorter development time. There’s the occasional graphical glitch in single player, although nothing game breaking – unlike issues with the in-game store, and occasional connection issues. Interestingly I’ve even had problems accessing the single player part of the game when the connection seems to have been struggling.

The audio of the motorcycles and MX-loving crowds is OK. You can hear the difference between a 250 and 450 bike or quad, and the fans seem to appreciate it when you do manage to land a stunt successfully. The generic racing game rock/metal is fine, although it’s as limited in variety as the circuits, so you’ll soon get tired of hearing the same songs again and again.

Graphically for a four-year old game it’s fine, but isn’t going to set the world on fire. The bikes and riders look fairly good, and the animations are handled decently enough that you won’t stop racing in disbelief. The scenery trackside is a bit bland, but you only really notice the limitations when you’re in Free Roam mode, which encourages you to stop and look around to try and find something to admire – and there’s not much. Basically you get sand dunes or coal heaps in a quarry, and that’s about your lot. There seems to also be a slight lack of polish in other areas – for instance the notification when you perform a stunt appears in plain white text – slightly jarring and not really in the FMX style guide.

The final niggle is with the online multiplayer. Joining matches seems to be quite finicky – joining friends has taken several attempts before we’ve finally ended up in the same lobby. Fortunately private matches work better, and seem to count equally for challenges and achievements.

Then there can be problems with players leaving during the 30 second pre-race practice time which allows you to pick bikes, rider skills (which can give you an XP bonus, a start boost or make you harder to knock off for example), and essentially locking the lobby in syncronisation mode requiring you to hit the guide button and restart the game.

Track selection is a simple A or B vote with a 60 second counter – but there’s nothing to tell players that the counter ends when you’ve all voted, leaving you screaming into your headset at the one non-voter for the 10th race in a row. When some races are 5 laps of under a minute each, spending 60 seconds on voting and 30 seconds on practice to arrive at a circuit you’ve raced on countless times gets more and more annoying.

But it’s not all bad. The races are fun enough, and the tracks are reasonably interesting once you’ve unlocked them all. Each one does take some learning as well – you don’t want to be boosting every jump to achieve the smoothest and fastest lap for example.

And leveling may be a necessity, but it passes reasonably quickly to the stage where all tracks, bikes and modes are unlocked. Each vehicle also acquires experience, and the performance increase is definitely worthwhile. Finally if you’re an achievement/trophy fan, almost all are quick and easy to obtain – which encourages you to stick with the game for a while. Once the rewards and XP bonuses for challenges start getting thinner on the ground, you might find your enthusiasm wanes, but there’s a handful of evenings worth of racing before then.

As a recent free Xbox Live download, MX vs ATV Alive was pretty much essential for any racing fan who hadn’t tried the series. But I’d be hard pushed to recommend the game now for anything more than under £5 secondhand or as a digital download.

Essentially the game itself has been surpassed by MX vs ATV Supercross which is remarkably similar, but does include 17 tracks, a career mode and an evolution of the stunt system – plus as the first game published by Nordic Games it’s going to be the one which will get any updates and DLC first, having arrived in October, 2014 for Xbox 360, PS3 and Windows PCs.

If you have friends who have a copy, then it’s worth checking out and can lead to some fun situations. Or if you really want to see some very short cut scenes of an incredibly bored James Stewart before downloading the free James Stewart Compound DLC to be able to race around his personal track. But like many franchises, once the latest title arrives, there’s rarely a reason to travel back in time.

In addition to details of the ESL R1 esports series, we've also seen Spa and … END_OF_DOCUMENT_TOKEN_TO_BE_REPLACED

The format, team and prizes have been confirmed with the ESL R1 Rennsport sim … END_OF_DOCUMENT_TOKEN_TO_BE_REPLACED

There's a brand new Motorspass with 50 tiers of rewards, a country-wide illegal … END_OF_DOCUMENT_TOKEN_TO_BE_REPLACED