Microsoft has accidentally leaked an upcoming expansion pack for Forza Horizon 2 which will feature a collection of Porsche cars.

The mistake occurred when the Xbox team were releasing the promotional video for the Duracell Car pack for the game on Youtube, and accidentally used the wrong description, which stated:

Available exclusively for Forza Horizon 2 for Xbox One, this expansion adds 500 Gamerscore points, new events, and some of the German manufacturer’s most legendary cars including the 2014 Porsche 918 Spyder supercar.

Obviously someone scrambled to correct matters as soon as they realised. 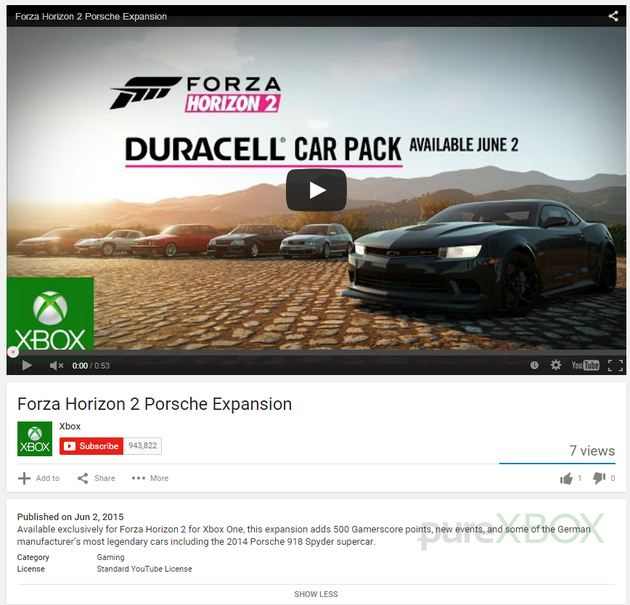 There’s no word on when the Porsche Pack will actually arrive, but it could well be announced during E3. Still it’s nice to know that new events and 500 Gamerscore will be coming to the game soon, along with the Porsche 918.

In addition to details of the ESL R1 esports series, we've also seen Spa and … END_OF_DOCUMENT_TOKEN_TO_BE_REPLACED

The format, team and prizes have been confirmed with the ESL R1 Rennsport sim … END_OF_DOCUMENT_TOKEN_TO_BE_REPLACED

There's a brand new Motorspass with 50 tiers of rewards, a country-wide illegal … END_OF_DOCUMENT_TOKEN_TO_BE_REPLACED