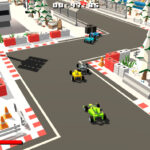 Developed by Josep Monzonis Hernandez as 2Awesome Studios, isometric arcade racer Formula Bit Racing DX launches on consoles today, July 8th, 2022. It was originally released for the PC in February 2021 as Formula Bit Racing, but now comes to the PS4 and PS5, Xbox One and Xbox Series X|S and the Nintendo Switch under the new name. It's not the only racing game to take a … END_OF_DOCUMENT_TOKEN_TO_BE_REPLACED

Mobile racing fans will have a new location, karts and more to try out as the … END_OF_DOCUMENT_TOKEN_TO_BE_REPLACED