With a release date set for Spring 2011 on Xbox 360, PS3 and PC, more details have been emerging for Need for Speed: Shift 2, including some brief hands-on time for some sites, and an interview with lead designer Andy Tudor featured on Eurogamer.

Given that NfS: Shift 2 is explicitly being pitched as a rival to Forza Motorsport 3 and Gran Turismo 5, it’s interesting to look at all the information and see whether it might stack up. 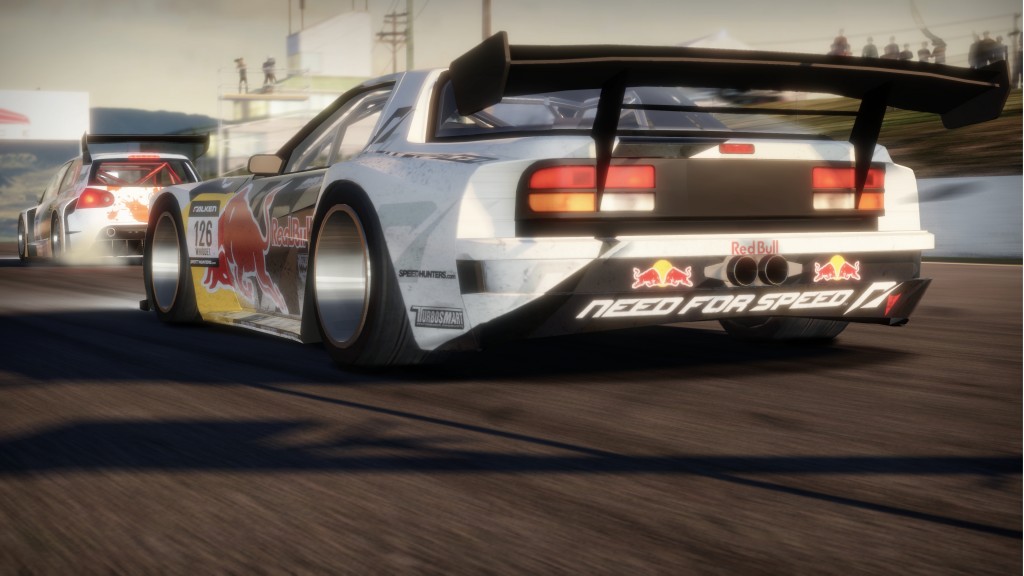 One key fact is that it won’t attempt to include every car in the world – Tudor refers to research showing most people collect 10-15 cars in game – their first career car, one or two for each vehicle level, the car they own in real life, and a handful of dream cars.

So the focus for the game has been on the handling and experience side, with a new elite handling model and more control over all the controller settings (sensitivity, deadzones, steering aids etc). The release of Need for Speed: Hot Pursuit has meant that developers Slightly Mad Studios have been able to focus on the simulator side of racing, and streamline in-game currency and ratings for example. Two further areas for improvement are the social racing side, including an improved Autolog facility as seen in Hot Pursuit, and improving the in-game rivals.

Looking at all the sites which were able to get hands-on experience of the game, it appears that the ‘helmet cam’ stands out. Rather than a view from a fixed point, it aims to simulate the effect of a cam actually mounted in your crash helmet, reacting to bumps and undulations on the track, and moving to look at the apex of corners.

Graphically it appears that Shift 2 will be an improvement over the previous game, with the new rendering engine impressing quite a few people, and the implementation of night racing becoming a key feature.

The night racing takes a different approach to most games, with a more realistic approach. Rather than including floodlights and chevrons to keeps things easy, the night racing in Shift: 2 Unleashed relies on your track knowledge and your headlights – and if you crash and lose your headlights you’ll be in real trouble!

There hasn’t been much information forthcoming about the handling model, but it appears to err on the ‘twitchy’ side as it did in Need for Speed: Shift. and along with the social side of Autolog, the driver battles, and the battle to control your car, will be the chief challenges in the game.

Will Shift 2 challenge GT5 and FM3?

Shift 2: Unleashed is certainly shaping up to be an interesting addition to the sim racing category, and it’s likely to be a viable alternative – especially for those who don’t enjoy the collection side of owning every car and completing every track in GT5 and FM3.

The first game was certainly a very fun and enjoyable racer, and it’s being timed quite well, as certainly FM3 fans won’t complain about a new racer to try. The good reception for Need for Speed: Hot Pursuit will also have helped revitalise interest in the series, and the doubts over the future of Project Gotham Racing will see a potentially slimmer field. If we assume ORD readers will definitely own either GT5 (PS3 owners) or Forza (Xbox 360 owners), and exclude F1 2010 as focused on a single race category, the Shift 2 is likely to be the big 2nd race game. The only potential fly in the ointment might be the Codemaster sequel to Racedriver: GRID, depending on the release date.

Many racing games tend to follow a similar formula, so it's interesting to see … END_OF_DOCUMENT_TOKEN_TO_BE_REPLACED

After a delayed launch for the PC, Xbox and PlayStation platforms, the … END_OF_DOCUMENT_TOKEN_TO_BE_REPLACED