The Virtual One gaming community announced its ’80s Touring Car Series a few days ago. With a fantastic mix of cars and tracks, this could prove to be a brilliant race package – and it’s one that I had to share too!

Posted on our forums at the weekend by zombiewoof following the initial announcement, I added a summary for easy reading. Several pages of rules and information are on the Virtual One forum, so do pay it a visit if you’re interested in taking part.

Based on a love of 1980s motorsport and the Saloon Car/Touring Car days, the series had a drawn-out inception and almost stalled at the ‘idea’ stage as a result. Fortunately for the good of racing, resolve and that ’80s love affair has brought Virtual One’s Touring Car Series to life on the Xbox 360. There’s a little background story to this series and an explanation of the compromises made in order to finalise the car list and run the league. For the purposes of nostalgia and appreciating the organisation that’s taken place, it’s definitely worth reading! 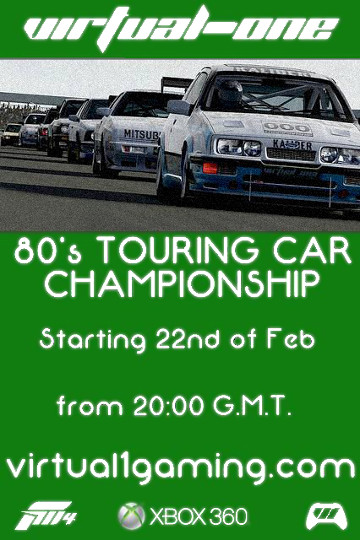 Here are the key season details as posted on our forum.

The Virtual One ’80s Touring Car Series will run on Forza Motorsport 4 (FM4, Xbox 360). The competition is based on team entries with 3-driver teams. Independent entrants are welcome too!

All drivers must be signed up to take part. NO EXCEPTIONS!

Race nights will begin with an initial qualifying session, followed by three races where starting positions will be derived from that night’s results (see below).

Each race meeting will consist of 3 races.

Models from the 1990s have been chosen due to the limitations of Forza 4’s car catalogue. All of the cars selected were in production during the 1980s and the last year of manufacture has determined their inclusion.

For full series details, car livery rules and to register for the event, visit the ’80s Touring Car sub-section of the Forza Motorsport 4 area at Virtual One.

Enjoy the racing! We’re expecting it to be… enthusiastic!

In addition to details of the ESL R1 esports series, we've also seen Spa and … END_OF_DOCUMENT_TOKEN_TO_BE_REPLACED

The format, team and prizes have been confirmed with the ESL R1 Rennsport sim … END_OF_DOCUMENT_TOKEN_TO_BE_REPLACED

There's a brand new Motorspass with 50 tiers of rewards, a country-wide illegal … END_OF_DOCUMENT_TOKEN_TO_BE_REPLACED