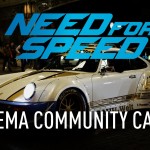 It's great when the worlds of online racing and real world cars collide. Which is why it's worth watching the video story of the Need for Speed SEMA Community Porsche. The idea for the car was announced at Gamescom - Need for Speed worked with air-cooled Porsche 911 builders RWB, Urban Outlaw and Bismoto. But it was also built based on the choices of in-game customisation … END_OF_DOCUMENT_TOKEN_TO_BE_REPLACED

The previously leaked Forza Horizon 2 Porsche Expansion Pack is now available. There aren't any official details on how Turn 10 were able to strike a deal with Electronic Arts, who still hold the official Porsche License, but obviously it's a familiar situation after the similar circumstances with Forza Motorsport 4. It's like 2012 all over again... Included in the Porsche pack … END_OF_DOCUMENT_TOKEN_TO_BE_REPLACED

It's not entirely unexpected, but it's nice to see official news of Art of Rally … END_OF_DOCUMENT_TOKEN_TO_BE_REPLACED