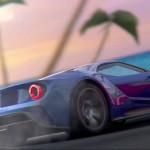 Forza Motorsport 6 is released for Xbox One on September 18th. 2015, and the first official TV Commercial has been released. It's interesting as it features the hero cover car 2017 Ford GT driving through a short history of racing videogames, finally arriving at Forza 6. And it includes one game which was particularly famous as a PlayStation release. So did you spot … END_OF_DOCUMENT_TOKEN_TO_BE_REPLACED

Mobile racing fans will have a new location, karts and more to try out as the … END_OF_DOCUMENT_TOKEN_TO_BE_REPLACED