Once again it was, “Back to the 50’s” this past weekend at the MSRA “Back to the 50’s” 37th annual car show in St. Paul Minnesota. With 11,795 cars on display only the State fairgrounds is large enough to handle this record setting outdoor summer event. In fact, this is the largest 3 day rod and custom car show in the world! 125,000 spectators were drawn in this year. The only restriction to be in the show, is to have a 1964 or older car.

My own entry is a candy apple green 1955 Chevy, originally purchased new by my grandfather in 1955. With 120,000 original miles on its 265cid V8, and 3-speed manual transmission, it still glides over bumps like it has four over inflated inner tubes, rather than tires. Driving the old car is a real step back in time as it has no power brakes or steering. Everything happens in a kind of ‘take your time’ slow motion whether turning or braking. Acceleration provided by its approximate 165hp small block V8 is merely average in these modern times, but was actually above average in 1955. Maybe that’s why seat belts were only an option. Gas mileage for the first OHV V8 Chevy ever produced, is about 25mpg on the highway thanks in part to a manual overdrive, and not a single pollution control device. Not bad for a 3600lb car that turned 55 years old this year! 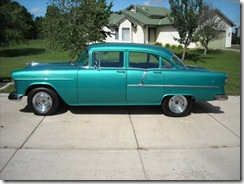 Washed, waxed, and ready to go to the show! 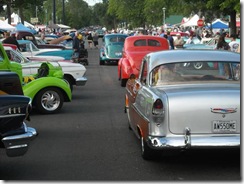 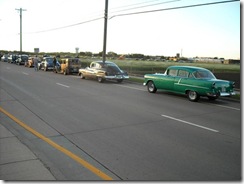 A few of my friends.

Who was here? lol

There's another option for you to choose when hauling loads across the USA, as … END_OF_DOCUMENT_TOKEN_TO_BE_REPLACED

In addition to details of the ESL R1 esports series, we've also seen Spa and … END_OF_DOCUMENT_TOKEN_TO_BE_REPLACED

The format, team and prizes have been confirmed with the ESL R1 Rennsport sim … END_OF_DOCUMENT_TOKEN_TO_BE_REPLACED