As Shift 2: Unleashed is almost on store shelves, the final updates are coming out for the disciplines, tracks and cars which will feature in the game, alongside news of rewards for owners of some of the previous Need for Speed games.

One of the final two discplines to be announced is the Endurance Races discpline, for those who love longer challenges. The rival in this class is Tommy Milner, who is an ALMS driver for Corvette Racing. But in Shift 2, he’ll be in the BMW M3 GT ALMS, which will be your prize if you beat him. Milner previously drove the GT2, and the car will be familiar as a cover star of Need for Speed Shift, feating a 4-litre V8 engine. 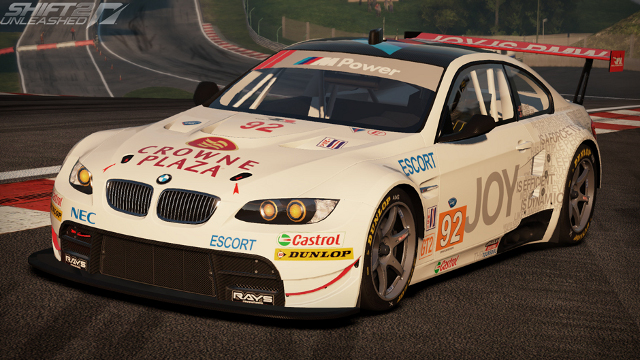 The Californian Willow Springs Raceway has been around for more than 50 years, and appeared in Need for Speed Shift. The main track features 9 turns, a 160mph+ front straight and unusually the layout hasn’t changed since it was built in 1953.

The famous Suzuka Circuit is slightly younger in terms of age and makes its first appearance in the Shift series. The Japanese track is owned by Honda, and host events including the Japanese Formula One GP. The standout fact is that it’s laid out in a figure 8, with the back straight passing over a bridge over the front section. It’s one of the oldest tracks in the F1 calendar, and also hosts the Suzuka 8 Hours motorcycle race.

Finally the fictional Nevada Freight Depot is an open drift stage in an industrial setting.

There are still a few empty spots left on the car list for Shift 2: Unleashed, but nine more vehicles have been accounced:

Rewards for owners of Hot Pursuit, Need for Speed World, Shift or Undercover:

To qualify for all the rewards above, you must use the same EA Account for each eligible game and have logged in to your same EA Account to play that eligible game. To receive your rewards, you will need to be logged in to your EA Account and have redeemed your SHIFT2 Unleashed Online Pass code. To check if you’ve received rewards, go to the NEED FOR SPEED VIP section located in the EXTRAS of your copy of SHIFT 2 Unleashed.

Check out the full list of Shift 2: Unleashed Tracks.

And take note of the full list of Shift 2: Unleashed Cars announced.

In addition to details of the ESL R1 esports series, we've also seen Spa and … END_OF_DOCUMENT_TOKEN_TO_BE_REPLACED

The format, team and prizes have been confirmed with the ESL R1 Rennsport sim … END_OF_DOCUMENT_TOKEN_TO_BE_REPLACED

There's a brand new Motorspass with 50 tiers of rewards, a country-wide illegal … END_OF_DOCUMENT_TOKEN_TO_BE_REPLACED