Turn 10 has announced the cars included in the latest monthly downloadable car pack for Forza Motorsport 4. The August Playseat Car pack will be available on august 7, 2012, and will cost 560 MS Points.

As always, there’s a range of cars included, covering dates from 1962 to 2013. In the mix are a WRC legend, a record setting Le Mans sportscar, some notable classics and some of the latest examples of cool cars.

First up for discussion are the two modern muscle cars. The Mustage Boss 302 features styling cues from the original 1970s classic, and the 5.0 litre V8 engine from 2012 with 444hp and 380 ft/lb of torque (The original series also ran for two years on the same drivetrain, so it counts as another homage). There’s a few styling upgrades with heat extractors and a new front splitter, plus the yellow paint referring to the 1970 Trans Am championship car of Parnelli Jones. 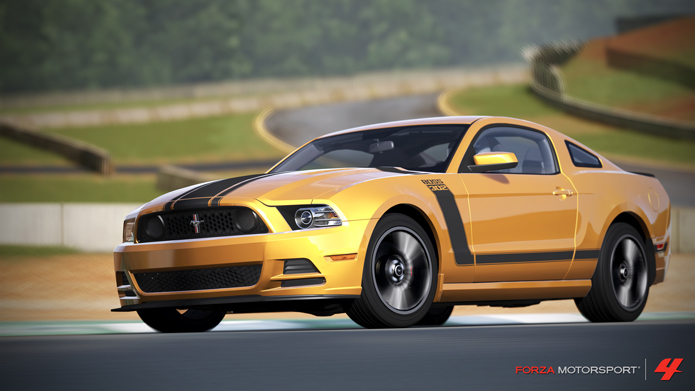 The Boss is up against the 6.2 litre supercharged V7 of the Camaro ZL1, which goes with Brembo brakes, adjustable suspension and 850hp.

Then there are the classics – the Lincoln Continental stands out as the least track-friendly car despite a big V8. But by comparison the 1962 Triumph TR3B weighs just 2,200 pounds, with a 2 litre engine making 105 horsepower. Which means it’ll be competitive against the open top classic sportscars already released for Forza.

Skimming over the rest of the modern era, there’s the DB7 Zagato, which is cool but not radically different from every other Aston. The 3.8 Track version of the Hyundai Genesis should handle and perform pretty well with a good combo of power and handling, and there’s a luxury Lexus. It’s the Scion which stands out as the result of a collaboration between Toyota and Subaru – it’s a return to sports cars for Toyota. The end result is a rear-wheel drive car weighing 2,800 pounds, housing a Subaru flat-four 2.0 litre with 200hp.

And finally there are two sporting legends. The Mercedes claimed pole and second position at the start of the 1989 Le Mans race and followed with a win and a second place at the end – also claiming the fastest legitimate speed on the old Mulsanne Straight with 247mph. The aluminium twin-turbo V8 gave 800hp to propel a light-alloy monocoque chassis. It’s darn quick.

And finally there’s the one car which really got us interested in this pack, despite the fact it looks like a normal front-wheel drive hatchback of the early 80s. 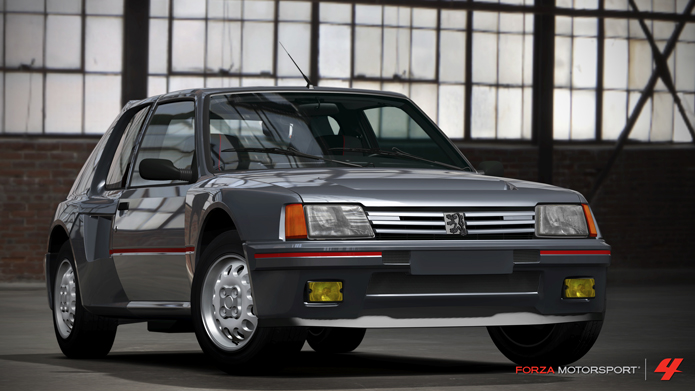 The Peugeot 205 T16 was built for one reason – to meet homologation for the Group B World Rally Championship, which required 200 road cars. To race and claim an astounding win record before Group B was deemed too fast and dangerous, the French firm built a mid-mounted four-cylinder turbocharged 16 valve engine powering four-wheel drive. And the only difference for the road cars were the lowered turbo boost and the interior trim.

This is the one which we’d love to own in real life – the rally cars took first place in 3 rallies in 1984, 7 wins in 1985 and 6 in 1986 before the Group B rallying days were sadly brought to an end after fatal accidents for both drivers and spectators. Timo Salonen took the driver title in 1985 with Juha Kankkunen winning in 1986 and the constructor title going to Peugeot both years.

This hatchback took on the Audi Quattro, Ford RS200, Metro 6R4 and the Lancia Delta!

And as with all the Group B cars, they did live on in sports such as Rallycross, where a Peugeot 205 T16 was a race winner in the hands of Finland’s Matti Alamaki. With the Ford RS200, Lancia Delta and Audi Quattro already present, all we need is the Metro 6R4 to run a full rallycross championship in Forza at last!

In addition to details of the ESL R1 esports series, we've also seen Spa and … END_OF_DOCUMENT_TOKEN_TO_BE_REPLACED

The format, team and prizes have been confirmed with the ESL R1 Rennsport sim … END_OF_DOCUMENT_TOKEN_TO_BE_REPLACED

There's a brand new Motorspass with 50 tiers of rewards, a country-wide illegal … END_OF_DOCUMENT_TOKEN_TO_BE_REPLACED