Having rediscovered the photos, we can finally share what happened when ORD’s Dan Thornton had the chance to sample a day of drifting in the real world and see if all the hours on Forza and other games had paid off. It was an example of one of a range of driving experiences available to buy online (click here), and proved to be a great way to sample it without having to invest in a full-on drift car.

The day involved a Caterham, an empty car park at Silverstone, some cones and some expert tuition. The first thing to learn was that we wouldn’t be traveling about 30 or 40mph for the whole day. That might sound a bit tame, but remember most of it was sideways! 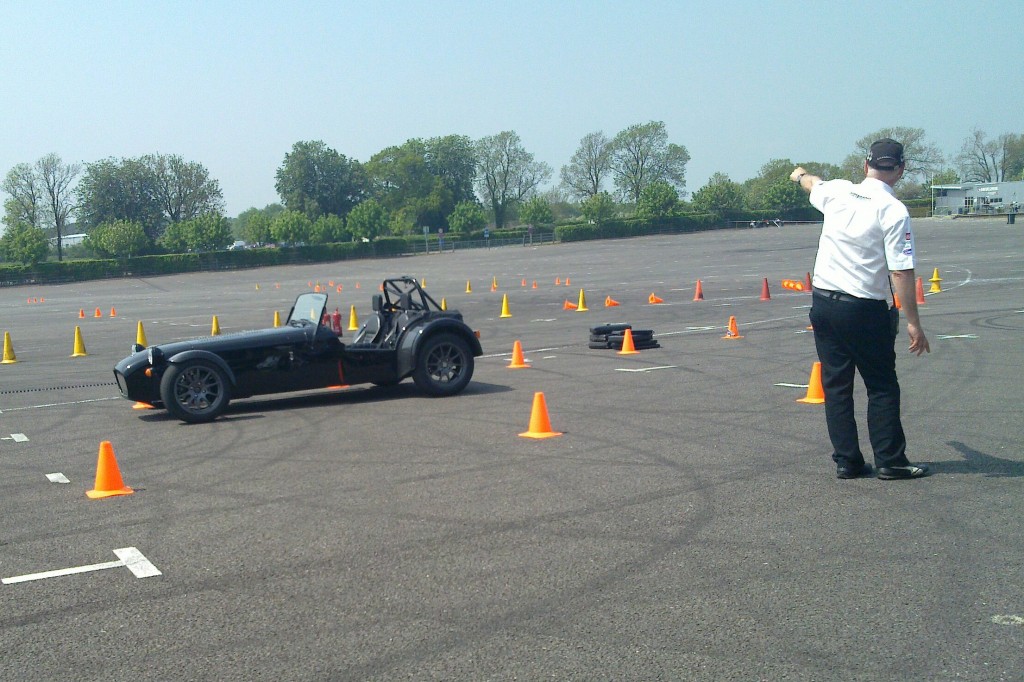 Take the car, drift it around the cones, and drive back. Simple, eh?

I’d never had the chance to drive a Caterham before, so the first thing I noticed was the acceleration and responsiveness. Considering they were powered by a similar engine to the one that had propelled my own Ford Focus down to the venue, the loss of so much weight made an amazing difference. Something to remember even when tuning virtual cars.

Chatting to some of the guys running the event, it turned out that even a full day of being constantly tortured by a group of drivers wasn’t going to use up a full tank of petrol or the fairly solid rear tyres. Suddenly my mind was already calculating the cost to buy my own car park and a secondhand car.

Who wouldn’t want to play with this for a day?

More fun in a Caterham than a Focus. As long as you don’t need luggage, a stereo or a roof.

The initial course was set to a relatively simple figure of eight to give everyone a chance to get used to going sideways. The range of drivers was pretty broad between amateur experts and people who hadn’t even got a driving license yet! What was most impressive about the day was that everyone was able to learn and have fun regardless of their skill levels, and everyone showed massive improvements.

Having only drifted on dodgy roundabouts covered in diesel, it took a run or two to overcome my natural urges to keep everything in line and aim for the apex. Instead, I had to run wide, turn hard, plant the throttle and then keep balancing it and the counter-steering to gracefully drift around the obstacles.Which happened occasionally, in between the more common spins and cone-destroying antics.

Dan’s technique may have had an obvious flaw

As the course evolved to become longer and more challenging, my driving definitely improved. Before each run we were given some extra pointers, and over the day it became more about holding drifts for longer than struggling with the basics.

Getting advice, and then trying to apply it whilst sideways.

The great thing about the relatively low speed was that sliding around all day resulted in relatively little aches and pains compared to a full-on track day. Being vertically-challenged did require an old sofa cushion to get me comfortable in the harness, but that didn’t result in too much sliding around.

“Where’s the joypad to control this thing?”

Having gone to the day on my own, and only having my mobile with me didn’t give a lot of chance to capture my antics on video, but luckily someone did volunteer to grab a clip of me in action. Sadly it was at the start of the day, so you’ll just have to believe I improved a lot.

And this is how it would have looked if I’d remember to get a clip of me later on. This footage of one of the instructors on the longer course is pretty much the same as I was managing, obviously!

The big thing for me was consistency. By the end of the day I was confident in drifting around a few of the obstacles and stringing several together. But each attempt varied wildly between just about getting it sideways and Tokyo Drift King. And obviously it’s hard to judge when you’re in the car rather than watching.

Overall it was a great experience and with prices comparable to a decent day out, it’s well worth checking out. It’s not only improved my drifting abilities on and offline, but learning how to control a slide definitely helps if you’re caught out during normal driving in poor conditions. Rather than panicking, you can react appropriately. Now when can I have another go?

Almost exactly two years after it was originally announced for Spring 2021, … END_OF_DOCUMENT_TOKEN_TO_BE_REPLACED