I’ve finally returned to competing in organised online racing, having had a bit of an enforced break due to work and family commitments. And what better way to ease myself back into things than going up against some of the best Forza Motorsport 4 racers in four 50 lap sessions around the famous Indianapolis 500 Brickyard?

The CRA & VM Indy 500 was originally being organised by the CRA Racing team and Virtual Motorsports as a fun event, but following the death of Danish racer Alan Simonsen at the 2013 Le Mans 24 Hours, it also became a way to pay tribute to him, hence the tribute badge on all competing cars. Which is why a tribute to a Danish racer competing at Le Mans took place on an American track in English cars, with every driver competing in a stock Aston Martin DBR9. 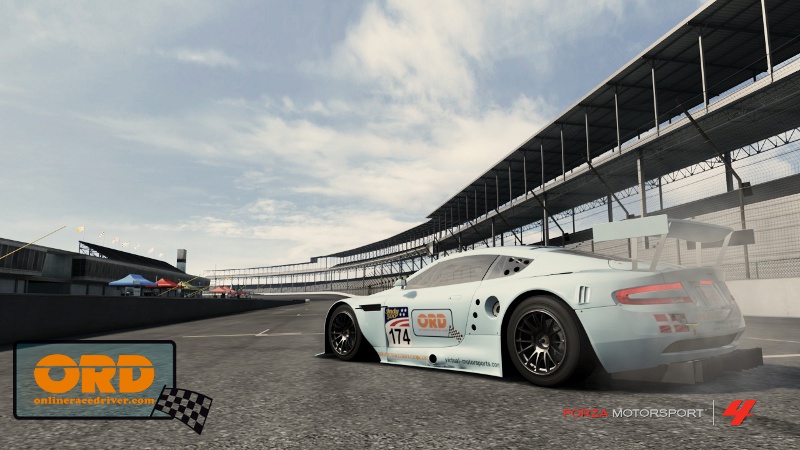 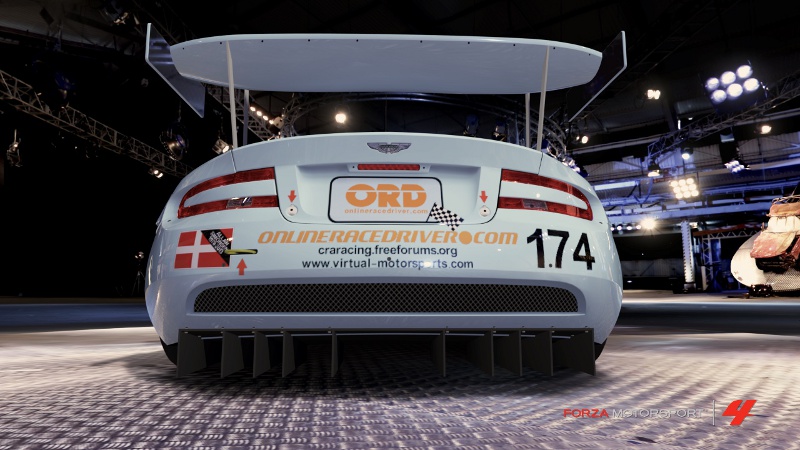 Oddly enough, I’d actually requested #174 which was still vacant at this point in the Virtual Motorsport season, as the closest tribute number to the #74 run by GP racer Dajiro Kato, who lost his life whilst competing at Suzuka.

But enough of the sad thoughts, and on with the racing…

With everyone competing in the same cars, and only four corners on the oval, qualifying was an extremely close affair. The top drivers were in the 49 second laps, and without any real practice, I was happy to make it into the third lobby of drivers with a low 50 second attempt from the 10 minute qualifying session. In fact, I somehow ended up in pole position for the first race (The following 3 races would set the grid from the previous race finish positions). 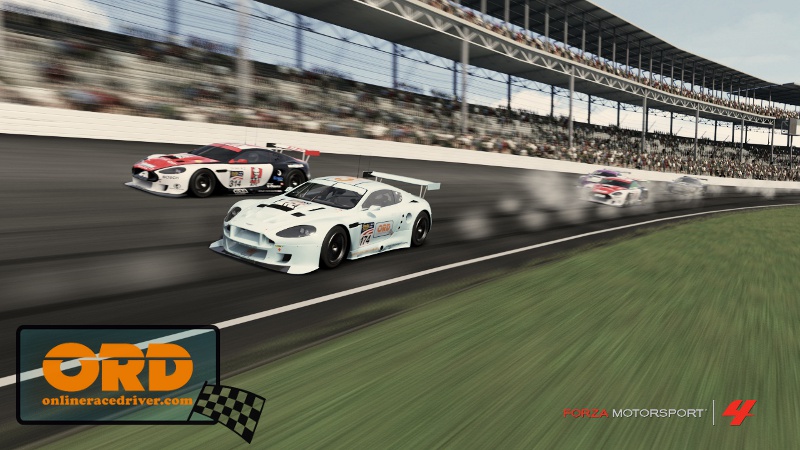 Race 1 did not go well for me. Having led away from pole after a reasonable start, I was starting to dice with CRA Ling Dingo, one of the large CRA contingent in my lobby. Realising that slip-streaming was going to play a big part, I wanted to just keep in clean and hoped we could both pull away from the chasing pack, which worked until I made a complete mess of the first corner, followed by an even worse mess of the second. And the main reason was a fly had come into the living room and decided to land right in the middle of the TV!

That left me eventually halted by the sticky infield grass, and trying to recover without causing problems for anyone, I ended up in last place, miles from the next competitor.

Cursing, I focused on being smooth and trying for the best possible laps, and managed some very close to 50 seconds, which cheered me up. After the mandatory pitstop, I managed to make some minor mistakes, undoing the good work I’d been trying to achieve, and ended up coming in second from last… And finally had time to make sure that insect wouldn’t return.

Race 2 could only get better, and in fact, I made a pretty good start and worked my way into the middle of pack early on. Determined not to lose the tow of the cars in front, I tried to follow CRA driver dragonsyoung on an overtake into Turn 3, but slightly misjudged the effect of the slipstream and started understeering into the car we were passing. Although I’d let off the accelerator to avoid crashing, I ended up tagging the back of another CRA competitor The Giant NL. Luckily he wasn’t too badly affected, but I ended up spinning down to the bottom of the track and having to recover from last place again – this time I managed to claw my way back up to 6th, setting the fastest lap of the race in the process.

By Race 3 I’d given myself a stern talking to. This time there was no self-inflicted idiocy, and instead I had an epic race for the lead with CRA Ling Dingo. For around 40 of the 50 lap race we swapped positions twice per lap, as he’d pass on the Start/Finish straight, and I’d return the favour on the back straight.

I’d hoped pit stops and other drivers might work in my favour, but it wasn’t to be. Instead the final 10 laps saw both of us trying to work out the right strategy for the finish line. In second place into the final corner, I knew that I’d managed to catch and pass before the line, but being out by the tiniest of fractions on the line and throttle meant I lost out by hundredths of seconds.

Having a great, and close race without issues meant that I was looking forward to the final session.

Race 4 was a bit of an anti-climax – having pulled ahead with CRA Ling Dingo once again, I got caught out when he failed to overtake on the main straight and looked back at just the wrong time, clipping the wall. That dropped me back a fair way, and by the time I was settled into a rhythm in fourth, the next two cars (Giant NL and CRA BalmierPie671) had settled into a slip-streaming routine of their own.

Unfortunately Ling Dingo appears to lag out of the race just before halfway, meaning that my only hope was that the pair in front had some kind of mishap. I was putting in some of the fastest laps of my whole evening, but could only manage to hold the gap steady as they sensibly slip-streamed their way around the track.

I’m not sure what happened, and it was past the limits of Forza’s 30 minute replays, but it appears BalmierPie671 had some sort of collision or issue in the closing stages which put me up into second – hard luck for a guy who had put in a lot of effort into hosting our lobby effectively. And despite closing in by a couple of tenths every lap at the end, Giant NL took a well deserved win considering I wasn’t the only person to have tagged him during the night…

Lag, slip-streaming and rubbing did make for some interesting moments

All-in-all, it was a great evening of racing, even if finishing in the early hours did tire a fair few people in the lobby, and I suffered a little from a lack of sleep the next day. I’m not a big oval racer, so it was a chance to try something a bit different and in a nice car to drive – the times when I lost the pack were a little lonely, but it was generally self-inflicted!

Hopefully I’ll manage a few more races and get to compete against some of the CRA guys again before the end of the season, and then in FM4 or FM5 depending on what happens in the future…

Either way, Team ORD is back! If you’re not in a team, or you need some support in joining any of the major online race series, give me a shout, as it’d be great to have some assistance in the VM, IFCA and TORA series in the future!

In addition to details of the ESL R1 esports series, we've also seen Spa and … END_OF_DOCUMENT_TOKEN_TO_BE_REPLACED

The format, team and prizes have been confirmed with the ESL R1 Rennsport sim … END_OF_DOCUMENT_TOKEN_TO_BE_REPLACED

There's a brand new Motorspass with 50 tiers of rewards, a country-wide illegal … END_OF_DOCUMENT_TOKEN_TO_BE_REPLACED