Between running a business and a handful of websites I’ve had a bit of time away from organised online racing. But I couldn’t resist returning to the Virtual Motorsports Classic Series. The seventh season now allows cars up to and including 1995 models, each tested and given a set of parts to balance it with the rest of the field, giving a massive selection to choose from.

I had a shortlist of cars for consideration, to make it easier to narrow down the 100+ selection. As an Englishman, obviously I had to pick a traditional American muscle car, and Chevrolet and Ford were both out – I’d previously raced a Ford Fairlane and Chevy Nova SS.

I did toy with the idea of a Japanese race machine this season – the Nissan 240Z showed a lot of promise and had an awesome engine noise, but I seemed to remember other people had raced them in previous seasons, and although the Mitsubishi Galant VR4 was unusual and predictable, it didn’t feel like a lot of fun. I also had a quick try out in a Mercedes 190E, but having raced it in other series, I wanted something less race-focused and more fun. 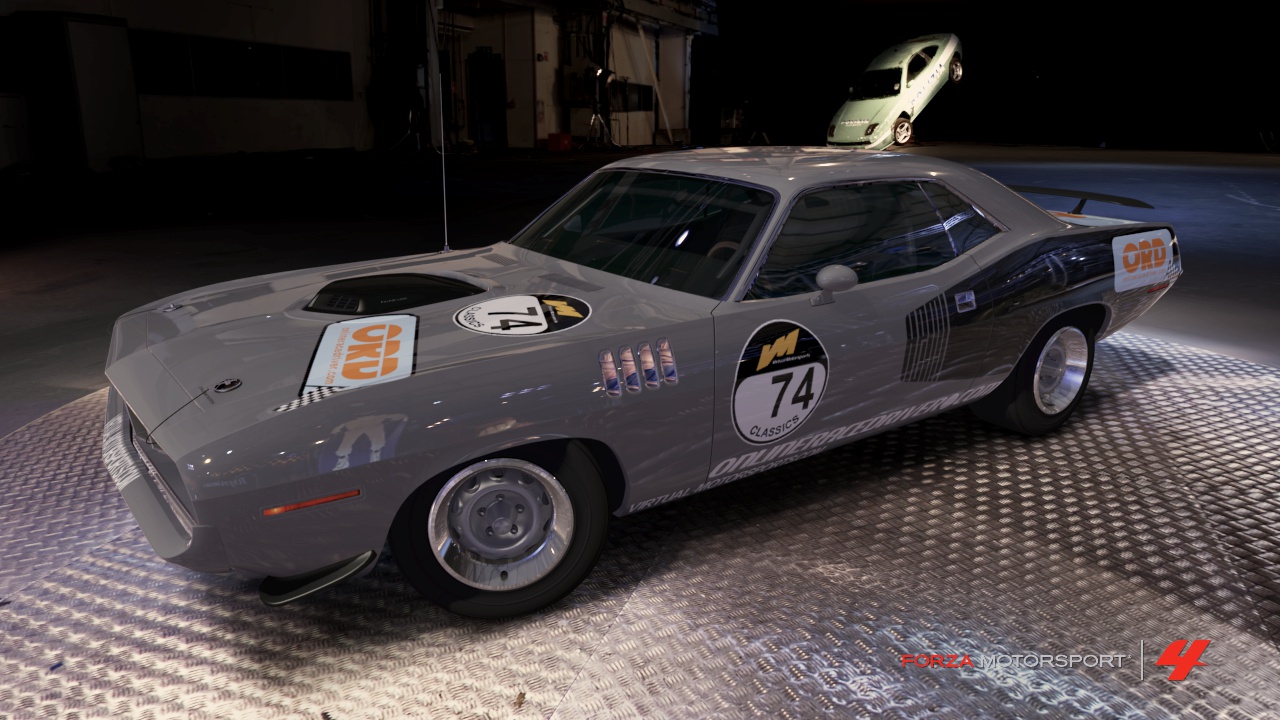 Having only committed to actually race at the last minute, I didn’t do much beyond picking my car and painting it. It’s a testament to the work and dedication of the Virtual Motorsports team that all the cars I tested were within around 0.5 seconds of each other without any tuning – showing you can really pick whatever you fancy.

I did tweak the brakes to lock a little quicker – stopping something this big for the tight 1st gear chicane needed all the help it could get. I also did some minor adjustments for a little more rear traction on acceleration.

Qualifying went OK. There were some much quicker guys as expected who were lapping in 1 minute 52 or 53. I managed to improve on my testing time in the mid 1 minute 55s, and qualified for Lobby 4, which was about what I hoped for. In fact, of the 12 or so cars in Lobby 4, we were all covered by less than a second.

We formed up for a rolling start with my Cuda in 7th place, and everything got away smoothly – I lost one place in the opening quarter of a lap as I tried to take things easy, but was happy to follow the guys in front for the first handful of laps and then see if I could improve.

And then it went wrong – one of the guys in front had a moment, and I couldn’t avoid him quick enough.

It was a minor collision (and he was nice enough to send an apology), but ending up on the grass meant the field had lone gone by the time I’d recovered.

All I could do was pit as early as possible and try and refocus on just running some decent lap times. Towards the end of the race I’d managed to catch and pass a couple of drivers, but the group in front were just too far ahead, and with such a close field, it was never on the cards to come back through everyone…

So I left Hockenheim with some improvements to make. It was frustrating to almost not get to race due to a router/internet conflict with another driver (Who graciously let me have his space), and then to get caught up in an innocent error and have to recover from the back. But I’d expected to end midfield anyway, and it wasn’t a bad effort with no tuning at all.

Plus the next track is Road America, so hopefully the big motor should pull me clear for the first corner.

Although that track has caught me out in the past…

Either way it’s good to be back racing again, with some familiar faces and plenty of new ones. And with almost 100 entrants, it shows there’s still a healthy interested in Forza Motorsport 4 at the moment…

In addition to details of the ESL R1 esports series, we've also seen Spa and … END_OF_DOCUMENT_TOKEN_TO_BE_REPLACED

The format, team and prizes have been confirmed with the ESL R1 Rennsport sim … END_OF_DOCUMENT_TOKEN_TO_BE_REPLACED

There's a brand new Motorspass with 50 tiers of rewards, a country-wide illegal … END_OF_DOCUMENT_TOKEN_TO_BE_REPLACED