For today’s one-lap run with Project CARS, we took another step away from the regularly featured single-seaters and more conventional road-going machines to run with a Track Day special. 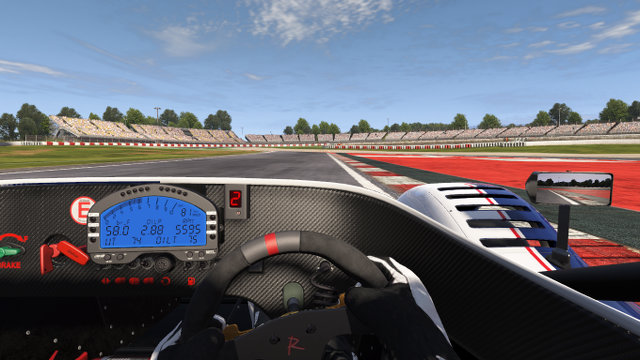 Thanks to a healthy selection in the game, the choice wasn’t all that easy when faced with marques that also include Ariel, Caterham and BAC. It had been a long while since seeing one of the cars from Peterborough though – so Radical it was!

Common across this category, it could be said that the cars are purpose-built for speed and handling on the track whilst also remaining road-legal. However the dual-purpose concept works in real life, Slightly Mad has certainly made them feel at home when running over a variety of courses. We have to add that between the closed circuits and point-to-point roads that are in current Project CARS builds, the entertainment value shines out when you put the right foot down and navigate the bends.

Reaching the game’s Radical selection screen, we went with the full-on SR8 RX. The venue chosen is the Besos National Circuit. After years of sim racing, we may have a sense of familiarity at Besos but that new little right-left section at the 45-second mark can be a tough one when you start pushing. Note: that’s before you head to a race!

Around Europe, Project CARS will be released on 21st of November. We featured news of the Limited Edition box and pre-order details last month.

In addition to details of the ESL R1 esports series, we've also seen Spa and … END_OF_DOCUMENT_TOKEN_TO_BE_REPLACED

The format, team and prizes have been confirmed with the ESL R1 Rennsport sim … END_OF_DOCUMENT_TOKEN_TO_BE_REPLACED

There's a brand new Motorspass with 50 tiers of rewards, a country-wide illegal … END_OF_DOCUMENT_TOKEN_TO_BE_REPLACED