Forza Motorsport 6 will add a new Mods system for Career and Free Play modes. Mods in this case meaning modifiers for your racing, rather than moderators to keep the Forza community in line.

The various mods offer additional challenges, handling and performance changes, and additional bonuses to give bigger rewards for succeeding. Access to Mods will be unlocked as you play through the game. 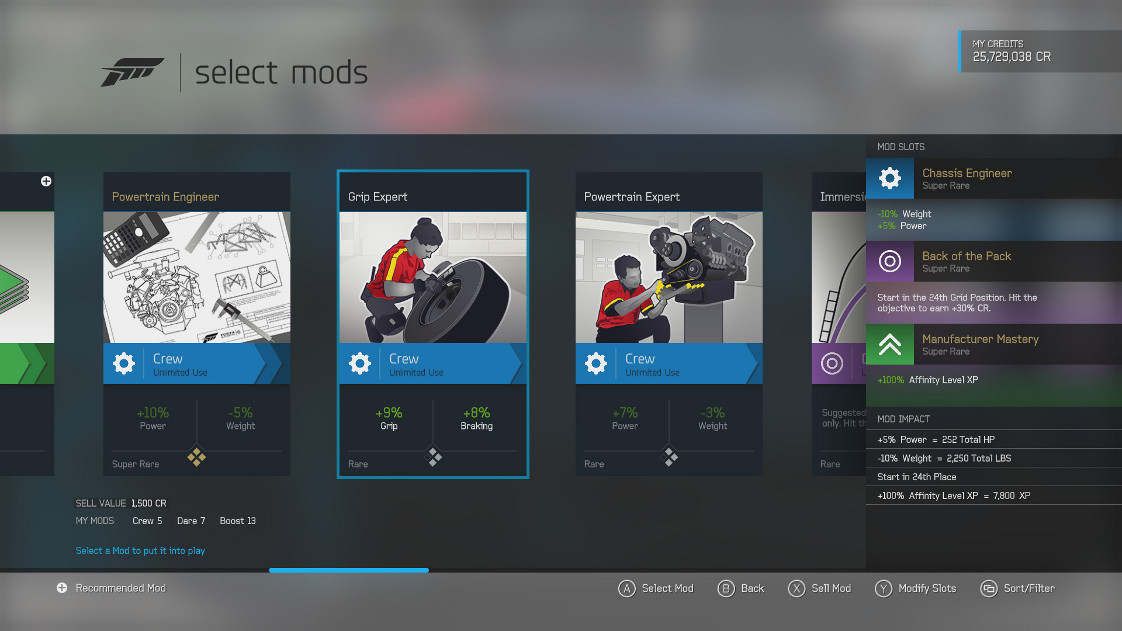 Dare Mods are essentially tougher challenges to give a credit bonus. You can only take on one Dare Mod at a time, but you can repeat them as much as you want, with higher level Dare Mods being harder and paying out more credits. Many Dare Mods also force you into racing with locked assists off, which will give you more credits anyway.

Crew Mods are basically ways to get a bit more performance from your tuning and upgrades. Rather than allowing you to get rewards, you’ll be able to increase your abilities by a set amount. Obviously which Mod to pick depends on your confidence. And on your car and track choice.

Finally come Boost Mods, which don’t give your car extra speed. Instead they give you an extra reward for performing well by gifting extra credits or bonus XP. You can only use each Boost Mod once, and then they’ll disappear.

You’ll be able to get Mods in two ways. Each time you level up or reach a milestone, you’ll get a go on a Prize Spinner which offers cars, credits and Mods. Alternatively they can be bought with in-game currency.

But as they come in Mod Packs, you won’t know exactly what you’ll get. You’ll only know which packs have a better chance of carrying rarer Mods, with bigger and better rewards.

Once you’re able to have enough mods, you can run up to 3 Boost Mods, or include 1 Dare and/or 1 Crew Mod per race. So you can run 1 of each type, or fill up more slots with Boost Mods if you want.

The Mods are limited to Career and Free Play. Not only are they banned from Multiplayer, Leagues and Rivals event, but Career Leaderboards will show lap times as ‘dirty’ if they were achieved with Mods.

In addition to details of the ESL R1 esports series, we've also seen Spa and … END_OF_DOCUMENT_TOKEN_TO_BE_REPLACED

The format, team and prizes have been confirmed with the ESL R1 Rennsport sim … END_OF_DOCUMENT_TOKEN_TO_BE_REPLACED

There's a brand new Motorspass with 50 tiers of rewards, a country-wide illegal … END_OF_DOCUMENT_TOKEN_TO_BE_REPLACED