Everything about the Thrustmaster T500 RS suggests an extremely high level of quality; the specs, the only official Gran Turismo 5 licence, and especially the £400+ price. But does it live up to the expectations that have built since it was announced at the start of the year? Read our Thrustmaster T500 RS wheel and pedal set review to find out.

Having been lucky enough to secure a review unit for a couple of weeks of testing, I was overjoyed to see a courier straining under the weight of the box. And it’s not surprising – in total there’s about 12kg or so with a 7kg metal pedal set and a 4.5-5kg wheel. This isn’t going to work as a wheel you could balance in your lap.

Apologies for the crappy cameraphone  pictures as a better camera wasn’t available at the time! 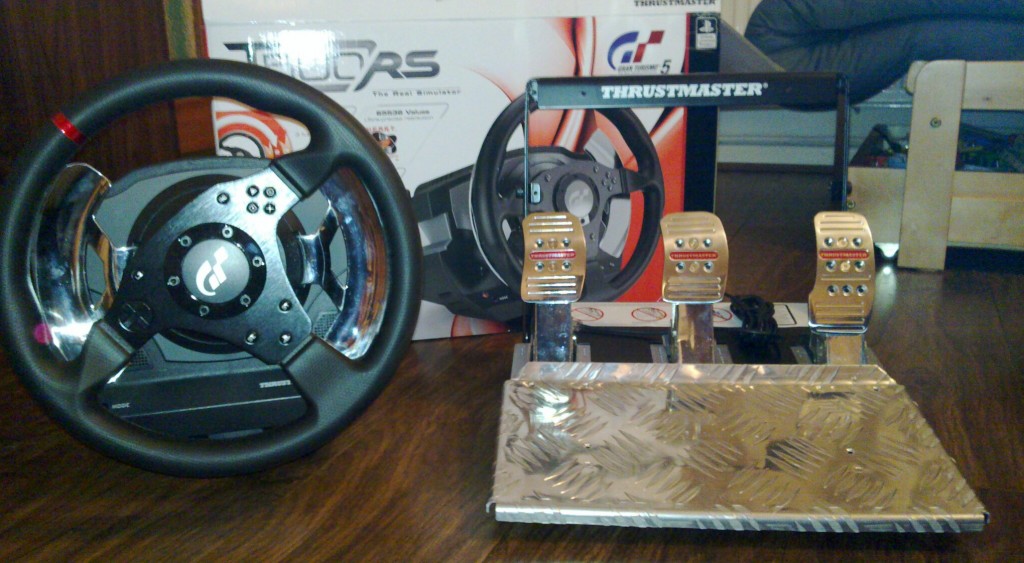 Having struggled into the lounge I started unpacking, and even sceptical family members had to admit that it was pretty impressive. Besides the new car smell of the wheel, the pedal set has the kind of engineering which looks like it’s been lifted straight out of a parked GT car. Even the power adaptor for the industrial electric motor in the wheel unit is pretty substantial, and the wheel unit itself looks absolutely great with a metal wheel and gearshifters mounted to the plastic body. Every part of the kit feels like it can take a lot of knocks, which is reassuring for a hefty racing investment.

I started setting up the pedal set first. They can be mounted on the floor F1 style, or suspended in a GT position which is more practical with limited floor space. They’re fully adjustable for height and spacing, so heel-and-toe braking is achievable even for those with tiny feet, and they come with adjustable braking resistance, although it comes unfitted, so you’ll need to attach it to benefit from the resistance when you apply the virtual brakes. Having spent 10 minutes adjusting and fiddling, it was then onto the wheel. 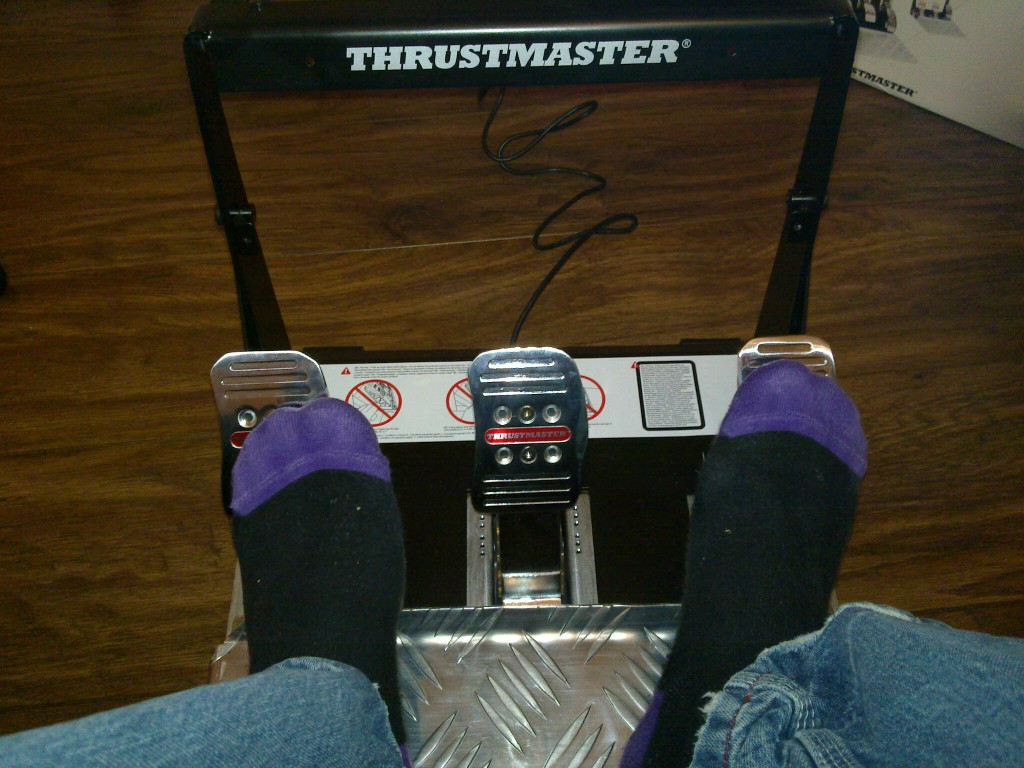 Again, there’s a range of adjustment for positioning the wheel in a stable fashion – and you’ll need to plan a suitable surface if you don’t have a racing set-up already. Luckily, there’s far less to sort out, and the gearshift paddles are nice and easy to reach, and great to operate. Inside the wheel there’s an industrial electric motor for powerful and responsive force feedback, and the wheel itself can do 1080 degrees rotation – three full turns. Using magnetic sensors means that heavy use shouldn’t have any effect on the accuracy of the wheel, so the benefits shouldn’t be short-lived.

And it was pretty obvious that it brought some benefits to my driving. I’ll be honest and admit that I come from a console controller and third-person view background, so although I’ve started using the in-car view more in games, it’s still my default initial settings for reviewing the handling model in games. But besides feeling stupid using a wheel for a behind-the-car view, I also noticed that switching in-car didn’t have the initial hit on my lap-times that I expected. If you’ve used a force feedback wheel in the past, you’ll know that a game which provides decent levels of information on tyre adhesion will let you record faster lap times, and the T 500 RS is certainly the best wheel set-up I’ve used for providing the right information for me to even chop a bit from my best laps on a number of tracks.

In short, the Thrustmaster is the best racing wheel and pedal set I’ve had the pleasure of trying so far, and has had the most positive effect on my actual driving, as well as my enjoyment of the games. And if you’re a classic car fan upset at using paddle shifters, there is an external gearshifter coming, although it will cost extra.

But I’ve saved the biggest benefit to last, and it’s this that has made me seriously consider investing my own money in actually buying a T 500 RS for myself.

As someone fairly serious about online racing, I’ve seen the scepticism of friends and family, even when I’ve explained how professional drivers use simulators for training, the success of GT Academy winners and the times Gregor Huttu recorded the first time he’d ever sat in a racing car.

But nothing I ever said or did had the same effect as letting them use the T 500 RS. Suddenly older family members who struggled to manage a single corner with an analogue joypad could understand exactly what was happening and start to actually manage respectable racing. Friends who either didn’t touch consoles, or only played the latest Call of Duty and Fifa suddenly became interested in GT5, and those who had dabbled in Forza or Gran Turismo suddenly started asking about online racing leagues and tuning tips. 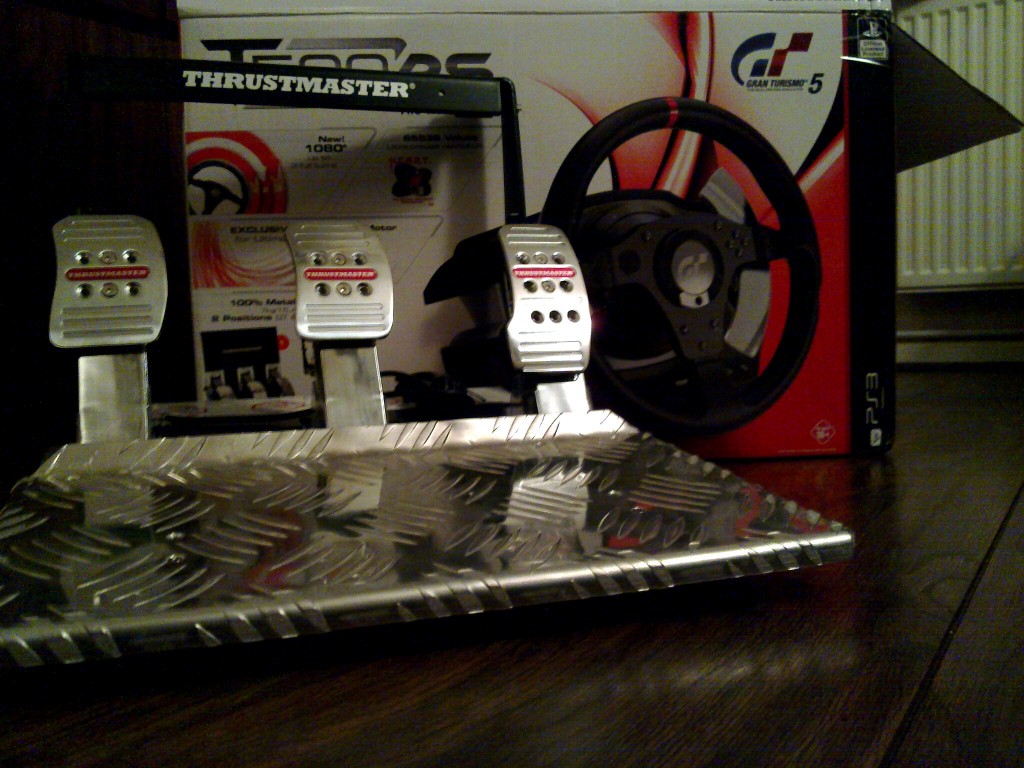 And that’s a major part of the appeal of the Thrustmaster set-up. Yes, it’s pricey and you could almost buy an actual car for a little more – certainly you could spend a day on a real track. But it’ll no only last you longer than both of those options, and cost you less in the long run than a £400 car, but it also builds the credibility and accessibility of racing games, and that means more people supporting our passion, which can only be a good thing.

Before the T 500 RS arrived, and after it left, I kept questioning whether any console accessory could be worth more than the price of the console itself. And although the T 500 RS is better than anything I’ve tried, the difference in price from competitors probably isn’t quite enough to justify the additional cost alone. But the effect it has on others, and the fact that it looks good enough to be permanently on display, rather than hidden from sight, means that if you’re serious about online racing and getting the absolute most from racing games, then actually it’s a worthwhile investment.

So the Thrustmaster T 500 RS gets 4/5 review, and if you’re thinking about buying it, please do consider using one of the affiliate links below as you’ll be supporting ORD at the same time!

The first World Superbikes game in 10 years will be released on September 15th, … END_OF_DOCUMENT_TOKEN_TO_BE_REPLACED

Whether you love or hate alternative fuel cars, they're a growing part of … END_OF_DOCUMENT_TOKEN_TO_BE_REPLACED