Behind all of the F1 2014 and F1 2015 fanfare in recent weeks, one format remained oddly in the shadows for download pricing: the PC.

As noted in our earlier Red Bull Hot Lap feature that included news of F1 2014 and Codemasters’ general plans for next year, information on pricing was non-existent on F1 2014’s Steam page.  Thankfully, it has been updated. 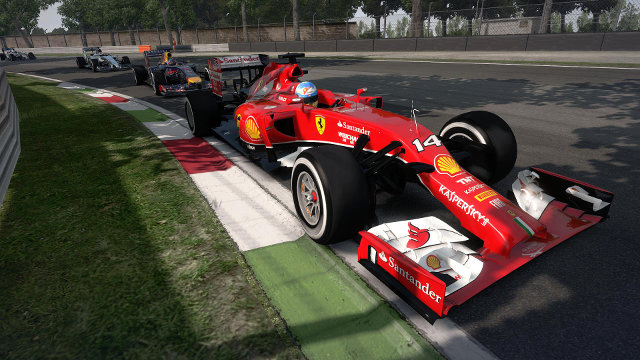 Released on the PC, PlayStation 3 and Xbox 360, F1 2014 will be available on October 17th for most regions. It will arrive a little later in North America – October 21st. A copy bought through Steam will cost £29.99 (GBP). According to SteamPrices.com, that equates to a high €49.99 (Euro) or more reasonable $49.99 (USD). Essentially carrying a 30 percent premium over the other territories, we only hope there’s a mistake in that pricing for our European racing friends!

No longer reliant on a tiered pre-order reward system like last year, Codemasters will offer its F1 Race Stars kart game to anyone buying before F1 2014 is released. On top of the standard Formula One-inspired main game, this freebie will include the four tracks available as extra DLC. With F1 Race Stars currently sitting at £14.99 in stock form and the DLC track packs priced at between £3.59 and £3.99 each, it’s not a bad little perk for anyone that doesn’t yet have Race Stars in their Steam game collection.

For anyone wary of new releases and fearing an oft-said need to chase a PC upgrade path, F1 2014 seems to hold true to its predecessors in not being an especially demanding game. As with other Codemasters racing titles, not only will the new F1 game run on a wide range of kit but we can expect a wealth of options when it comes to graphics and getting F1 2014 running well on PCs. If true to the DiRT, GRID and F1 series so far, it might be surprising how good the visuals still are when some of the shinier, more demanding options are turned down!

Codemasters does expand on the topic of F1 2014’s graphics card compatibility, adding the following catalogue for each of AMD and NVIDIA.

Moving to NVIDIA graphics, we see the following:

For on-board chips and APUs, suitability for F1 2014 is outlined as:

Unlike the striking and disappointing differences between standard retail and digital prices for many big-name console games on services like Sony’s PlayStation and Microsoft’s Xbox games stores, the PC continues to come out reasonably well on Steam even at this early stage for F1 2014. Whether F1 Race Stars is of interest or not, at least PC F1 isn’t listed as costing more than a physical copy’s recommended price!

In addition to details of the ESL R1 esports series, we've also seen Spa and … END_OF_DOCUMENT_TOKEN_TO_BE_REPLACED

The format, team and prizes have been confirmed with the ESL R1 Rennsport sim … END_OF_DOCUMENT_TOKEN_TO_BE_REPLACED

There's a brand new Motorspass with 50 tiers of rewards, a country-wide illegal … END_OF_DOCUMENT_TOKEN_TO_BE_REPLACED